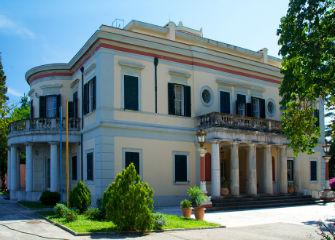 A publication cited in the British newspaper Telegraph, has caused reactions in Corfu. The publication said that the Greek government is selling the historic Mon Repos Palace, since in the real estate market it is widely known that such an eventuality could not leave the British palace untouched.

“From pristine beaches to palaces, entire islands and its London embassy, a nation in crisis is selling its assets,” reporter Harriet Alexander writes in the English journal, which has been operating continuously since 1855 and sells 650,000 pieces daily, is prestigious and its news are a source for thousands of other media worldwide.

Mon Repos, the property where royal families used to spend their holidays the last 180 years, includes besides the gorgeous palace, an area of ​​over 250 acres with unique gardens and is of great archaeological value, since the property is located in the Palaiopolis with finds dating from the 8th century BC

According to information cited on Sunday’s Ethnos journal, “It is a ‘provocative’ article, as stated by an agent in Corfu knowing the history of the property, this publication reflects the innermost desires of the royal family of Britain who is keen to acquire the Mon Repos, as they consider it their property. That was where Philip Mountbatten, Duke of Edinburgh and husband of Queen Elizabeth of England was born.

However, despite their desire, this unique ornament for Corfu and for all of Greece cannot be sold, as according to people who live on the island, there will be strong reactions. On the other hand, such a transaction is difficult to be made, as the property is of great historical and archaeological value.