The Kardashians Take Over Mykonos! 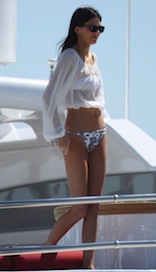 The American celebrity family the Kardashians are turning Mykonos topsy-turvy during their visit, reportedly enjoying the late spring sun and beaches at the beginning of a 10-day stay that has followers ga-ga with delight and gushing after their every move.

Their journey to Greece has put the Greek and foreign media on high celebrity alert for their stay, during which they will reportedly do some shooting for their TV reality show in which they star and is, of course, all about themselves and nothing else. Hordes of reporters and photographers are following their every move like they were a Presidential visit, hoping to catch a photograph of them in a bikini or anything.

They are shooting scenes for their series Keeping Up With the Kardashians, shown on E! Entertainment and has 82 million viewers in the United States, sitting on the edge of their chairs eager to watch every move of any Kardashian and the everyday life of people whose life is anything but everyday.

Taking advantage of the sunny weather and the high temperatures the Kardashian sisters put on their swimsuits and took a plunge in the blue waters off Mykonos. 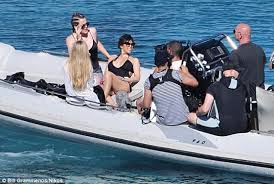 Brunette Kim was found walking in the garden of the villa where she lives, wearing a black bikini and green sarong, revealing her ready belly.

As Kim stayed in the villa to rest and enjoy the view of the endless blue, her sisters Kourtney and Khloe boarded a dinghy to enjoy the sea of Mykonos, followed by the television crew, of course.

Earlier, at their luxurious resort, the camera lens caught Khloe talking and playing with her 3-year-old nephew Mason, while Kourtney embraced her daughter Penelope, and seemed to worry about little Mason, who played poolside. 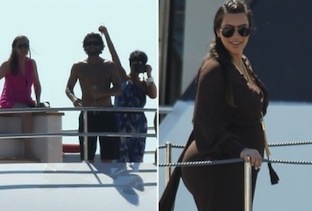 The famous family lodges in the luxury villas My Mykonos Retreat, with breathtaking views of the Aegean Sea Kendall Jenner posted on Instagram a photo of the pool connected to the sea, commenting that: “I’m in heaven!”

The DailyMail wrote that “Kardashians wealth and their love for shopping will give the island a breath amid the economic crisis in Greece.”

The grand plan of the visit of Kardashians in Mykonos was organized by Giorgos Trivizas, President of the Greek-American Chamber of Tourism, with Costas Skagias coordinating their stay there as well as on Santorini as they island-hop. In luxury, of course.