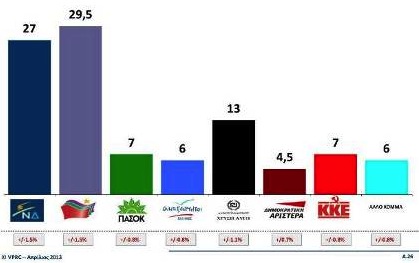 The roller-coaster surveys that show the ruling New Democracy (ND) Conservatives and major opposition party Coalition of the Radical Left (SYRIZA) taking turns in first place have switched again to the Leftists.
A VPRC opinion poll gives SYRIZA a 2.5 percent lead, 29.5-27.5 percent, with both parties having more than double the support of the neo-Nazi Golden Dawn party which is third at 13 percent.
The once-dominant PASOK Socialists, who won the 2009 elections with 44 percent, have fallen to fourth under new leader Evangelos Venizelos, with a mere 7 percent standing – tied with the KKE Communists – followed by the Independent Greeks at 6%, the Democratic Left (DIMAR) at 4.5% and other parties totaling 6%.
PASOK and DIMAR are coalition partners in the coalition government headed by ND chief, Prime Minister Antonis Samaras, and paying a price for supporting more of the austerity measures he’s imposing on the orders of international lenders putting up a second bailout of $173 billion through a series of rolling loans tied to reforms.
The poll, however, was done for a Leftist radio station, Sto Kokkino, and showed the KKE Communists gaining ground under new leader Dimitris Koutsoumpas, who replaced long-time head Aleka Papariga, who resigned after the party fell rapidly in the last few years.
Samaras is still a clear choice to be Premier, however, with 16.6 percent support to only 9.1 percent for SYRIZA leader Alexis Tsipras, although both may need to be concerned that 60 percent of respondents said neither was a suitable choice to lead the country during a crushing economic crisis.
A Metron Analysis poll published on April 21 in Eleftherotypia indicated that parties opposed to the loan agreements with the Troika of the European Union-International Monetary Fund-European Central Bank (EU-IMF-ECB) would take 51.9% of the popular vote, compared to the 45.8% they won in June. That poll gave New Democracy and SYRIZA 27% and 26.2% of the vote respectively.
The Troika has insisted on pay cuts, tax hikes, slashed pensions, a lower minimum wage, reduced unemployment benefits and the firing of 150,000 workers in return for loans.

Greek Army Deployed to Rescue Hundreds of Drivers in Athens