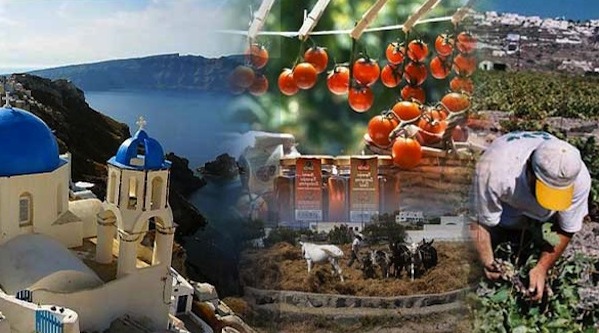 Mother nature did not bless the island of Santorini with rich soils from the very beginning, but the island’s ecosystem started to flourish after the volcanic eruptions of the past two centuries, which provided the inhabitants with the limited subsoil necessary to cultivate certain agricultural products. After many years of tirelessly cultivating of the small fertile surfaces on their island, Santorini farmers boast of some of the finest products to offer around the world. Half of the total number of Santorini products out on the market shelves today are already registered as PDO (Protected Designation of Origin) under the respective EU regulation and are most valued around the world for their originality, unique flavor and quality. In fact, the demand for local products from around the world has shown a rapid increase in the past years.

To achieve such fine results in their agricultural activities, the farmers of Santorini had to adjust to the island’s properties and help their plants benefit as much as possible from what the soils had to offer. Τhrough cross-breeding of the plant species the farmers managed eventually to reduce the plants’ requirements in nutrients and water, while they developed strong root systems able to penetrate the coherent volcanic soil in order to find the necessary humidity trapped in pumice. In time, the local plants grew more resistant to sunlight and strong winds, limited the evaporation of precious humidity and exploited the sea salt properties and the humidity developed within the caldera. And all of this had to come true because the wet season on the island stops in April and starts again in November. So when harvest time finally comes, the products may be small in quantity, but are so full of flavor that have no equals.

Santorini Fava Beans
The fava beans from Santorini have been recently registered as PDO by DEFRA and ADAS (the EU bodies responsible for administrating applications for PDO’s). The beans have been cultivated for 3,600 years in Santorini in only a few acres. The rough terrain requires manual labor and tractors cannot access the field. The volcanic subsoil of the island gives the fava a special sweet taste unlike the other favas found across the country. The current production levels are not sufficient to even cover the domestic demand. However, the product is praised as a unique delicacy that cannot be compared to any other of its kind. 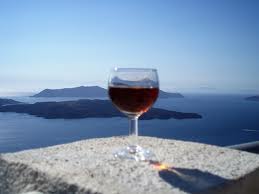 The island of Santorini is most famously known for its indigenous white grape varieties Assyrtiko, Athiri and Aidani, though some wines made from international varieties and also from indigenous red grapes such as Mandalieria and Mavrotragano can be found. About 1,200 hectares of land are under vine. During the Middle Ages the wine of Santorini became famous under the influence of the Venetians and their influence is still present in modern Santorini wine making.
One of the wines the region is known for is a sweet Vin Santo made from grapes dried in the sun after harvest. Vinsanto does not undergo any chaptalization and is made up only of the natural sugars and acids of the grapes. Vinsanto is made from late harvested grapes that have been dried in the sun for 12–14 days. They are then crushed and fermented and are then aged for a minimum of 24 months in oak barrels.

Santorini Cherry Tomatoes
The cherry tomatoes from Santorini are in high demand across the Greek market and abroad. The product is in the final straight to be recognized as PDO and will be the third product made in Santorini to enter the PDO list after the fava beans and the vines of Thera. According to testimonies and documents, the first crop on the island was recorded somewhere between 1870 and 1880. The cherry tomato is a variety that has easily adapted to the dry soil of the island, has a distinctive strong flavor and hard peel. Popular legend has it that the first seeds were brought to the island from the Suez.

Three more products cultivated on the Greek island are making their way to become PDO in the future. The Santorini crocus, the white aubergine and the local capers. There is a file under way asking for recognition of the Santorini crocus as PDO, while the two other products are already famous for being cultivated in the steep slopes of the caldera, which makes them particularly tasteful and special.