Greek World Champion of Injustice Gods Among Us 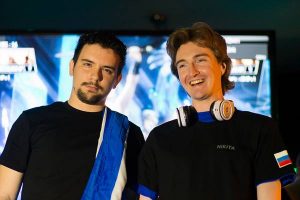 Greek Marios ‘Nivek’ Bitsikokos was the winner in the world championship Injustice: Gods Among Us, which took place at an impressive night club in Paris. Bitsikokos had previously won the Pan-Hellenic Championship in Injustice: Gods Among Us in Athens.
He is a Tekken and Mortal Kombat veteran and has represented Greece in championships abroad for both games. He belongs to the Greek Dojo Academy, where the greatest Greek fighting game  players train.
In the Paris Championship, along with Bitsikokos, the Russian Nikita, champion in the Russian Igromir, the largest Local Tournament, was distinguished. Nikita used Deathstroke as his basic character and won the French Championship.
Bitsikokos won a Polish player and passed on to the finals. Bitsikokos and Nikita were the finalists and competed against each other. The Greek player used the character Wonder Woman as his basic, won the Russian player and was named the World Champion in Injustice.
Bitsikokos says he is excited with Injustice. He adds that the quality of the game is excellent; it is very balanced and influenced by Mortal Kombat, but has many new positive elements. He insists that a good player at Mortal Kombat, will be good at Injustice as well. Bitsikokos is among the best Mortal Kombat players in the world.
The final fight was difficult and uncertain, but Bitsikokos managed to win gaining the title of World Champion for Greece.
.[youtube]5J3iM7QEEF4[/youtube]