Immigrants in Greece Into the Fire 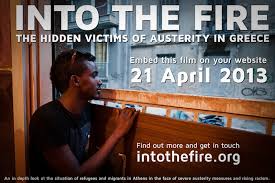 Into the Fire is an investigative documentary directed by Guy Smallman and Kate Mara, which raises the problem of refugees and immigrants in Greece who are facing strict austerity measures as well as growing racism.
“The refugees abandoned their homes, seeking safety in Greece, a country which, due to its geographical borders with Turkey, makes it one of the main gateways in Europe,” the creators of the film noted.
“However, when entering Europe, European legislation itself prevents them from moving to other European countries. Nevertheless, in Greece, the treatment of refugees in asylum procedure is atrocious, as much as their detention in or from the country, as well as the living conditions.”
With no refuge, legal permits or support, all they receive is the growing and often violent trend of racism. These attacks do not target only the refugees, but every foreigner, including immigrants living in Greece for years.
Despite the inflammatory propaganda created by the far-right extremist party of Golden Dawn, and the wave of murderous attacks, the state and the police seem reluctant to address the problem. Complaints against police showing a friendly attitude to Golden Dawn is now a common secret. Refugees send a message to Europe and the rest of the world: “Let us go!”
In the first part of the documentary there are shocking testimonials of refugees and immigrants regarding their living conditions in Greece. There is also an investigation into racist attacks and violence against immigrants.
The second part includes Greek citizens speaking on the issue of the lack of commitment on the Greek state’s behalf and the police’s responsibilities. A Greek lawyer describes police violence against his customers, which reached the limits of brutality and could also be described as torture.
The documentary was released on April 21 in many web pages across Europe translated into several languages ​​and will be screened on April 29 at the School of Oriental and African Studies, London.
[youtube]NMOnuD0SQJs[/youtube]