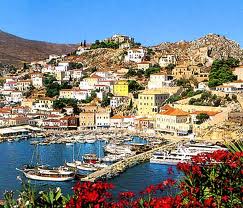 Greece without a car, is the title of a full page tribute to the “wild, beautiful, idyllic and one of the most beautiful places in Greece, Hydra,” cited in the Austrian newspaper Courier, accompanied by a series of photographs.

The Saronic islands are small and hidden in front of the Greek coastline; the green island of Spetses, picturesque Poros and legendary Hydra, which played a critical role in the Greek War of Independence in 1821, and emerges as a giant back of a dolphin in the sea, but inaccessible like a huge fortress.

The article includes a description of Hydra, which “unfolds as a huge amphitheater among huge rocks” and is available to everybody who wants to meet the 2,700 residents of the island and their daily lives which, among others, are characterized by the absence of roads and cars, while donkeys are the only means of transportation.

There is extensive reference to the historical past of the island, when in the 18th century it dominated politically and militarily with its large merchant fleet. There are also references to the life and action of the heroine of 1821, Laskarina Boumboulina.

The article notes that after a decline, Hydra became a major tourist destination ever since the 1950’s and 1960’s, when the old houses of the captains from the wealthy Athenians and strangers were renovated and many artists started to settle there.