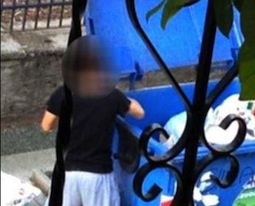 The Flemish newspaper De Morgen said in a story under the headline  The Reality Greek Schools Have to Face: Pupils Search For Food in Garbage, that the country’s austerity crisis has cut so deep into government spending and people’s disposable income that some students are going without enough good.
The newspaper’s reporter talked with a director of a primary school of Piraeus who said that some pupils are searching in the garbage to find something eatable or begging their classmates for the remains of their snack.
He talked about an 11-year-old pupil who he said is near starvation because his parents have no money to buy food and added that, “Even in my worst nightmares I couldn’t imagine that in the Greek public schools we would have starving kids who have to battle to survive”.
Greece has a record 27.2 percent unemployment because of pay cuts, tax hikes and slashed pensions that have also made the country’s Gross Domestic Product (GDP) shrink 20 percent in the last three years, and the jobless rate for those under 25 is 67 percent. The economic difficulties that Greece is confronted by have changed dramatically the way of life of many families whose children are malnourished, added the newspaper.
According to high-school teacher A. Linou, the diet of many children in Greece resembles African countries in quality. The Greek government initially rejected such incidents of hungry schoolchildren as unfounded even though it doesn’t offer any food programs in the schools, leaving students to buy their own from canteens or go without food during the class day.