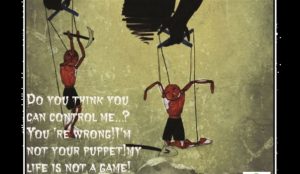 While the incident of exploitation of immigrants in Manolada, Ilia, shocks the Greek public opinion, students of the schools of Attica send their own message against modern slavery with their works of art for the exhibition, Step2Freedom, which will be presented at the Vryssaki art center in Athens.
Students, from 15 to 18 from public schools of Attica, present artworks, videos, poetry, stories, essays, songs and dance, using every form of expression that inspires them to send a message against the exploitation of humans throughout the world.
“Do not turn your back, it could be you. Therefore, helping those people should be your primary thought”, 16-year old student Nikos writes in his poem.
Step2Freedom, which will run from April 19 to 30, is co-organized by the U.S Embassy, the non-profit organization, No Project, and the Vryssaki art center. It constitutes the culmination of a series of educational workshops in the framework of the No Project initiative, which were conducted in public schools of Attica. The workshops aimed at raising students’ awareness of modern slavery and human trafficking.
No Trade is an independent initiative against human trafficking and aims to raise awareness in this regard, particularly of young people.
According to the No Project team, it is estimated that 20-30 million people are subjected to slavery and many of them are children. “Seventy percent of the money moving in human trafficking is related to sexual exploitation. However, most modern slaves are behind the products we consume: chocolate, coffee, tea, agriculture, clothes, carpets, even electronic devices. Everyone is a part of this consuming crime”, Judy Helena, a member of the initiative, explained to AMNA.
With the use of social media, the No Project team aims at mobilizing young people around the world to create in the fields of literature, music, visual arts and new technologies, upon issues concerning modern forms of slavery, in order to become aware and then raise awareness in the rest of the world.
“The children are upset when they hear that other children are victims of exploitation and express their anger in a clear, but not cynical way. And finally the children’s power and creativity inspires even more children”, Helena added.
Within two years of its activity, No-Project has created an advertising spot against human trafficking, in cooperation with students of Boston University, educational activities in schools of Greece, Turkey, Bulgaria, the U.S.A and New Zealand, a video with choreography by the internationally renowned hip-hop group, Request, and activities with the Greek hip-hop group, Lowcast, and the Greek hip-hop dance group, Ladies n’ Gents.
The exhibition at Vryssaki will also be complemented with animation movies and posters made by students of the Department of Graphic Design of the Technological Educational Institute of Athens. Their works shed light to aspects of human trafficking in order to raise public awareness.

The first-ever written exam for Greek citizenship is scheduled for May 16, 2021, according to an announcement from the Interior Ministry.
Greece