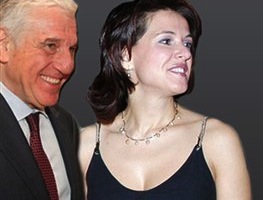 Former Greek defense minister Yannos Papantoniou and his wife Stavroula Kourakou appeared in court on April 17 to testify in a case against them in which the government charges they failed to declare all their wealth, which is a crime. He was set free on 50,000 euros ($65,150) while his wife was released on 20,000 euros ($26,000) bail.
Investigators said they had found $2.2 million in a secret bank account in the Geneva branch of HSBC which was one of the 2,062 in the so-called Lagarde List that is being investigated by a Parliamentary committee and never checked by the government for possible tax evaders. It was in his wife’s name.
In his testimony, Papantoniou, a PASOK Socialist party stalwart, reiterated he had done nothing wrong. Initially he said he didn’t have an account in the bank and that the allegations were false, but then changed his story and said in a memo to a Parliamentary committee he admitted there was an account but that his wife didn’t tell him they had $2.2 million in the bank.
He then said it was his wife’s personal account that she had never informed him about into which her former husband had deposited money for their children. Then he said he really did know about the account that he said he didn’t know about and that it included his money as well as hers although he had said he didn’t know about it.
Prosecutors have ordered an investigation into his holdings and wealth and all his accounts, as well as his wife’s. They are also examining all the contracts he oversaw in the defense ministry, especially those pertaining to purchases of equipment.