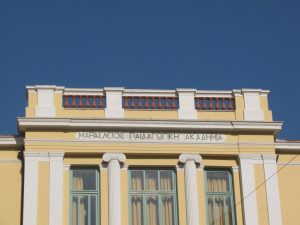 Three schools with rich architectural and educational history are now abandoned and in danger of demolition, at the same time the International Day for Monuments and Sites on April 18, 2013 is devoted to the Heritage of Education.
The buildings, which are located near the two central buildings of Marasleios Pedagogical Academy, the Neoclassical building of Kallias and the school building Aristotle of Antoniadis and Mitsakis, were designed by the architect Nikolas Mitsakis, among the first representatives of modern architecture in Greece.
These abandoned buildings are the sports shed, the two-floor events building and the ground floor building of baths on the Marasleios premises on Marasli, Alopekis and Souidias streets.
The buildings were constructed in the 1930’s. In February 2010, the members of the Central Council of Modern Monuments consulted against declaring them historical. A positive decision preceded in 2008 by the same Council but hasn’t been signed by the then Minister of Culture and the matter was reexamined.
The president of the Non-profit Company Monumenta, Irini Gratsia explains that the decision against declaring the buildings historic will lead to their demolition, so that a new building is constructed to house the 15th Elementary School, the pupils of which are having classes in prefabricated classrooms. In order to save the buildings, Monumenta has submitted an application to cancel the ministerial decision of non-declaration in the Council of State, that has been recently examined and the decision is expected.
The school buildings of the 1st Elementary School of Nea Philadelphia have not been designed by any famous architect, but are connected to the refugees’ settlement and its history and are the trademark for residents of Nea Philadelphia. The school is known as Spathari to honor Agisilaos Spatharis, resident of the region, who donated the plot and the first installations. The building was constructed in the 1950’s to replace the wooden school that had been built in the 1930’s. The earthquake of 1999 caused severe damages to the building and the last years it has been abandoned.