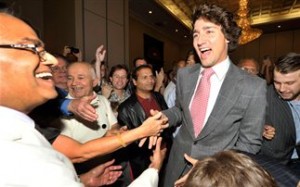 The Greek community is celebrating the victory of Justin Trudeau, who was elected on April 14 leader of Canada’s once dominant Liberal Party on a landslide vote. Justin, son of Pierre Elliott Trudeau,  the 15th Prime Minister of Canada, won 80 percent of the support of 104,552 voters.

Forty-two-year-old Trudeau has been elected in Papineau electoral district, which includes the neighborhood of Park Extension where many Greeks live. So the charismatic Trudeau is really close to the Greek community of Montreal, participates in Greek national celebrations and is informed of the Greek community’s news. He was also at the Greek Parade for March 25, with his son Xavier.

The younger Trudeau, who has been a member of parliament since 2008, is the eldest son of Margaret Sinclair Trudeau and former Prime Minister Pierre Trudeau. His political talent is sourced not only by his father’s side, but also by his maternal grandfather, James Sinclair, a former Liberal member of the Parliament.

Justin Trudeau said of his political heritage: “I am rather like my grandfather who was a good deputy and was aware of the need for organization which should unite, inspire and embrace all the Canadians”.