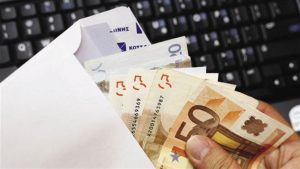 The Greek Parliament’s March 6 vote declaring that the traditional method of passing bribes in small envelopes called “fakelaki” may not be unlawful because they are just Greeks way of saying thanks for favors is continuing to spark reaction.
The provision came after the proposal by MP Giannis Panousis of the Democratic Left (DIMAR) party, which also planned to include a critical reference to the monetary value. According to this legislation, “the mere material inducements of no monetary value do not constitute bribery, but an expression of gratitude.”
On the TV show MEGA Weekend, Justice Minister Antonis Roupakiotis, explained why the provision does not include a reference on the monetary value, noting that there could never be a gift of no monetary value.
The President of the Hellenic Medical Society Matina Pagoni, who was also a guest on the same TV show, asked the withdrawal of the provision from the law about bribery, highlighting that it does not honor any doctor.
Moreover, prosecutor Vasilis Floridis argued that this legislation is totally misplaced and asked, “ The existence of the word ‘gratitude’ in a legal text? Do we even understand what it means? This reverses any rule of good administration.”