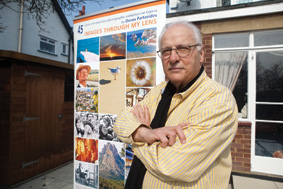 The 68-year-old photographer of Greek-Cypriot descent, Doros Partasides will showcase a number of his photographs in an exhibition at the Hellenic Center, in Paddington Street, Westminster.

The Association of Greek Orthodox Communities in Great Britain, along with the Hellenic Center are organizing the event. The exhibition will run from April 15 to 17, from 11 am to 6 pm.

Partasides told the press: “The exhibition will mark the Greek Orthodox Easter which in 2013 falls on May 5. The Greek Orthodox community in Barnet, Enfield, Haringey numbers around 120,000 people and Easter is a big event for our community.

“In my work I combine the priest in service or prayer with religious icons, but I also combine images of ordinary persons with the icons – Jesus Christ and Maria, mother of God.

“Having worked to prepare this exhibition for many years, it’s been a spiritual journey for me. I very much relate to what John Kennedy once said – art is not a form of propaganda, it is a form of truth. For me taking pictures of religious iconography and making these into works of art is truth.”

As reported in the Hellenic Center’s official website, Partasides was born in Cyprus in 1944 and joined the Cyprus Broadcasting Corporation as a cameraman in 1966. In 1972, he graduated from the Royal College of Art London in Film and Television. His work has received considerable critical acclaim and recognition in both Britain and Cyprus, particularly his work documenting the 1974 Turkish invasion of Cyprus. He now lives on Woodcroft Avenue, Mill Hill.