2013 Year of Gastronomy in Santorini 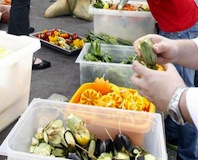 Santorini attempts “gastronomic excess” with a series of products unique in the world. Because of the character of its subsoil, products stand out for their taste and particularity, while often they cannot cover the increased demand, because of their limited production. Therefore, 2013 was declared year of gastronomy in Santorini, in order for the island to claim an important place internationally, not only as a tourist, but also as a gastronomic destination.
This different approach was discussed in Thessaloniki by Mayor of Thira, Anastasios Zorzos, Director of Excavations at Akrotiri, Christos Doumas, the President of the Institute for the Study and Monitoring of the Santorini Volcano (ISMOSAV), Michael Fytikas and NAGREF researcher, Ekaterini Traka.
In Santorini the weather conditions are particular. It has little rain and plants develop large root systems. This phenomenon gives fruit their special flavor. Plants adapt to the conditions and this is why they have tough skin, but delicious fruits and are particularly resistant to weather conditions.
“Through tourism, we will also try to promote our products. An information plan from the taverns, the hotels, the wineries and the lodgings already exists, especially this year that is a year of gastronomy.” said Zorzos, while Professor of Geology, Michael Fytikas, noted that since there are active volcanoes in Greece, those of Santorini, Nissyros and Methana, a union of volcanic areas could be created, in order to show the beautiful geological landscapes created over the centuries by volcanic eruptions.