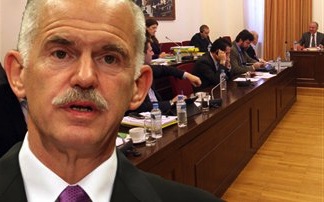 Saying they weren’t satisfied with a written deposition in which he claimed to know nothing about a list of Greeks with secret Swiss bank accounts that was in the hands of his appointed finance minister, a parliamentary committee again is beseeching former premier George Papandreou to appear in person, but not compelling him to do so.
Papandreou, now a Member of Parliament, spends much of his time in the United States lecturing at Ivy League colleges about politics and refused a previous request to return to Athens to testify.
He occasionally returns for business involving the PASOK Socialist party he also led before being hounded out of office in 2011 by constant protests, strikes and riots against austerity measures he imposed while his administration ignored tax cheats.
The decision to send him another invitation, following an 8-1 vote April 10, came as a surprise to deputies of the major opposition Coalition of the Radical Left (SYRIZA) party, who had proposed it but figured it would be opposed by conservatives who are a majority of the 13-member panel looking into the so-called Lagarde List that was never checked for tax evaders. The only dissenting vote from those present was from Panayiotis Rigas from Papandreou’s PASOK party.
Lawmakers from Prime Minister Antonis Samaras’ ruling New Democracy (ND) Conservaties were reportedly concerned that a decision not to summon Papandreou would expose them to criticism from PASOK deputies trying to protect him. PASOK is one of Samaras’ coalition partners and New Democracy deputies said they couldn’t justify refusing to ask Papandreou to testify because current Socialist leader Evangelos Venizelos had earlier been questioned.
Papandreou’s aides were reportedly surprised by the vote outcome, the newspaper Kathimerini said. They suggested that ND’s switch was a bid by the fragile coalition partners to back Venizelos in his thinly-disguised rivalry with Papandreou as the two had crossed swords many times and Venizelos earlier had failed in a bid to unseat Papandreou as party leader.
Sources told Kathimerini that Papandreou would likely either refuse the summons or ignore it and is expected to state that his written deposition was enough and that he doesn’t need to be questioned or cross-examined in person.
Papandreou was premier when former Finance Minister Giorgos Papaconstantinou first got the list from former French finance minister Christine Lagarde of 2,062 Greeks with $1.95 billion in accounts in the Geneva branch of HSBC but said it disappeared. The committee is investigating him after the names of three of his relatives also disappeared from the list when an original was retrieved from French authorities.
The panel wants Papandreou to testify as to whether he had any knowledge of how the list was handled after Lagarde gave it to Papaconstantinou before he passed it on to financial investigators and it vanished.
In his deposition, Papandreou claimed he was never informed about the list even though Papaconstantinou said it was coming, that he never asked about it and knew nothing about nothing.