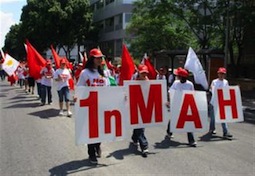 Greek Prime Minister Antonis Samaras, who has largely escaped the wide-scale protests, strikes and riots against austerity that brought down his predecessor, George Papandreou, will face a test for his coalition government on May 1 as the country’s private workers union (GSEE) has called a general strike.
It will be the second this year although the first failed to reach the levels of those in 2010 and 2011 in which scores of thousands of people flocked to Athens’ center in protests infiltrated by anarchists who clashed with riot police.
“GSEE has unanimously decided to hold a general strike on May 1,” the union’s chairman Yiannis Panagopoulos said. The workers are angry over repeated pay cuts, tax hikes and slashed pensions that have created a near 27 percent, a record that some analysts think could hit 30 percent.
The strike could be affected by this year’s later observation of Easter for Greek Orthodox, which is May 5, as it will fall during a holiday week and because of that the government set the annual May Day public holiday as May 7 instead of May 1.
The government, facing a sixth year of recession in 2013 that has been exacerbated by austerity measures, is hoping to avoid social unrest although Prime Minister Antonis Samaras has acknowledged the economy  – despite more coming loans that will bring the total of two bailouts from international lenders to $325 billion- is in “critical” condition.