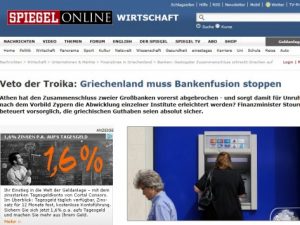 After the suspension of  a planned merger of the National Bank of Greece and Eurobank because of capitalization problems and opposition from Greece’s international lenders, the German magazine Spiegel said it believes the Greek government is planning to confiscate some of the deposits in banks as happened on Cyprus.
’The magazine said the decision raised suspicion that in an economic emergency that the government would go after bank accounts. Tax revenues are far off expectations despite big tax hikes as part of austerity measures that include pay cuts and slashed pensions.
The Troika of the European Union-International Monetary Fund-European Central Bank (EU-IMF-ECB) said it didn’t want the merger because it would create the largest lender in the country, with some 170 billion euros ($222.12 billion,) and be too big if there were solvency problems, as happened on Cyprus.
Greek Finance Minister Yannis Stournaras and a spokesman for Prime Minister Antonis Samaras have assured that despite the suspension of the merger bank accounts are safe and won’t be touched. There was no response on the Spiegel report.