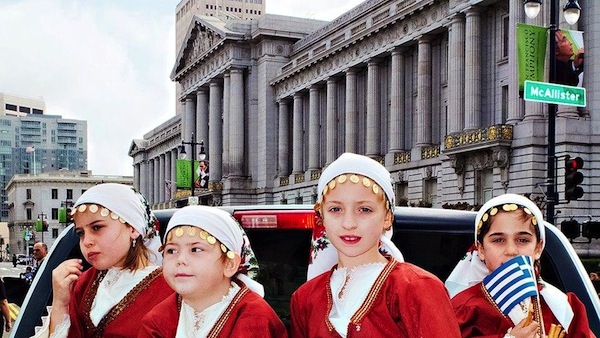 On Sunday, April 7, Downtown San Francisco, Market Street and the Civic Center Plaza were dressed in blue and white colors as the Greek Communities of Northern California from Modesto to Sacramento and up to Marin County and Napa Valley held the annual Greek Cultural Parade on the occasion of the 192nd anniversary of Greek Independence Day.

The event was organized by the Hellenic Federation of Northern California, also known as the United Hellenic American Societies (UHAS) which is headquartered in San Francisco.

Ted Laliotis, President of the Federation explained that the Greek Cultural Parade in San Francisco has two main objectives: to promote Hellenism in the non-Greek communities of the area and to make the Greek-American children proud of their Greek Heritage.

“San Francisco is a very colorful multicultural city and we try to share our culture with other ethnic communities of the city. We were honored this year to have marching bands, drill teams, drum corps and JROTC units from three San Francisco High Schools, as well as a Chinese Elementary School fan and ribbon dance group,” said Laliotis.

Besides the Greek Cultural Parade a mini festival with Greek food, Greek Music, and Greek Dancing is taking place before and after the parade.

This year the organizers were favored by great weather something that helped attract thousands of attendees, both Greek and non Greek.

Watch video and photos from the parade: