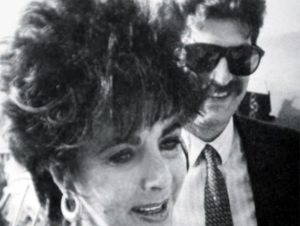 A Greek was in the past the guardian angel for many Hollywood stars, including Elizabeth Taylor, Sharon Stone, Francis Ford Coppola and many others.

The career, as well as the life of Dimitris Staikos looks like something out of a Hollywood movie. The former bodyguard passed many years next to glamorous stars. Today, at the age of 55, he has quit all this and has retired to his tavern, at the Lake of Glory Feneos.

“Luxury, riches and cinematographic life were demystified inside me”, he stated to the Greek newspaper Ethnos.

“What I can say about these people, is that I demystified them. Except from diva Sharon Stone, that we got into a fight.”

Among more than 60 celebrities he protected, Dimitris Staikos singles out everything he has lived with his friend, Elizabeth Taylor.

“When I met her, the first thing I told her is that she had the most beautiful eyes I had ever seen. She answered that she hasn’t had a compliment for 10 years. Kind, simple, spontaneous and so accessible, that woman with the seven famous husbands, the fabulous riches, the astonishing life, who exercised influence on kings, presidents, prime ministers and businessmen” he said and he continued referring to the most intense moment he had with her: “It was at the Grande Bretagne, where more than 1,000 people had gathered. All the celebrities of Athens were there. Ministers, businessmen, ambassadors wanted to touch her hand. Liz was terrified of the crowd. She asked me to leave and return to her suite. When we got back and she felt safe, she calls the reception and says: “I’m Liz Taylor. I want you to send me 12 champagnes, because I have 12 men in my bed”. This was Taylor with her amazing sense of humor! Christopher Forbes was with her. A Tycoon. They had come with his private jet 737.”

The last Hollywood star Dimitris Staikos protected was Sharon Stone. It was shortly after the Basic Instinct. The sexy actress had come to Greece and the former bodyguard remembers that she was cold, impersonal and that she was very demanding. They didn’t get along from the beginning. “Stone was a difficult case. Intense personality, wild woman. I remember that more than 2,500 people were waiting for her at Akrotiri. When we reached there, things got messy. Stone cut the ties of more than 60 eager men. I was furious. At some point, she made the wrong move and took my necktie. I got angry and I told her “you won’t take my necktie. To remember at least that a man protected you in Greece”. That was it. Then she liked me. But at that night, I had already finished with the protection of celebrities. I quit.” he says, without a trace of regret.