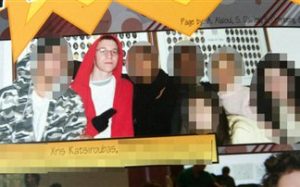 The Greek-Canadian community is still shocked by the news that Xristos Katsiroubas, 24, who left his Ontario home two years was one of the Islamic extremists who attacked an Algerian gas plant in January where hostages were murdered and reportedly blew himself up as soldiers moved in.

The Canadian government has asked for evidence that Katsiroubas, a Canadian citizen of Greek descent, raised with conservative values, could participate in the massacre. The Algerian authorities said he was among the member of an Islamist organization that carried out the operation. Katsiroubas had abandoned Christianity to embrace Islam.

He came from a wealthy family and showed no sense of violence during his years in high-school. His father, Stavros has migrated to Canada with his family when he was a child and eventually married a Greek immigrant as well.

His wife gave birth to two children, both boys, Andreas and Xristos. When Xristos was five years old, his parents divorced and started new families. The two boys stayed with their mother and her new husband. “Xristos never managed to overcome his parents’ divorce,” said a family friend. He was always been tolerant, friendly and quiet, as friends and former classmates told Canadian authorities.

Katsiroubas was a good student during elementary school, but things changed in high-school, when he met the Muslim Ali Medlej who became his best friend. “They were not very popular at school. Medlej played in the football team but had few friends because of his short-tempered character. Katsiroubas, in spite of being very clever and of being admired by others for his knowledge, was not very popular in school,” a former classmate of the two boys reported.

Katsiroubas and Medlej were very interested in Islam and since 2006 they started frequented the mosque to pray and watch sermons and speeches. “He was not the same person anymore,” mentioned an ex-friend of Katsiroubas.

From 2006, he had officially become Muslim and in 2007 he left his school and his family and devoted himself to Islam. He moved to Edmonton where he tried to find a job without success. Along with his friend Medlej, they were obsessively searching information about Islam on the Internet, which opened the path for a new life.

According to the Canadian authorities, the two young men were recruited in the armed struggle of Mokhtar Belmokhtar, an extremist who had broken away from Al-Qaida in the Islamic Maghreb. Under Belmokhtar’s orders, Katsiroubas participated in the slaughter at the Algerian gas field. Medlej has been married in 2012 but did not hesitate to follow his friend out of Canada. Their trails have been lost for a long time, until the previous week that their names were announced in the Canadian public television.