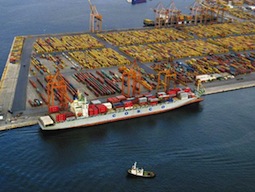 The takeover of the port of Piraeus by the Chinese company Cosco, which was fought by unions, is proving to be a money-maker, expected to bring in 5.1 billion euros ($6.59 billion) by 2018, or about 2.5 percent of Greece’s Gross Domestic Product (GDP).
That’s from Pier I, according to a study by the National Bank of Greece, as reported by the newspaper Kathimerini.
Traffic in Piraeus, which accounts for 90% of the Greek market, has more than trebled in the last three years, climbing to 2.7 million 20-equivalent units (TEUs) in 2012 from 850,000 TEU’s in 2010, against an increase of no more than 20% at rival ports in the Mediterranean.
As a result, Greek ports that handle containers absorbed 5.5% of all traffic in the Mediterranean in 2012, against just 2% in 2010. The report suggests that as the flow for the domestic market is expected to remain steady, the port’s further growth – after the new Pier III, which will also be controlled by Cosco, goes into operation this summer – will come from international container management (transit), which already comprises three-quarters of Piraeus’s traffic.
The growth in the port’s operation is also expected to create as many as 125,000 new jobs in the local economy by 2018, the National Bank study estimated.