German and Mother Tongue Language on a Par 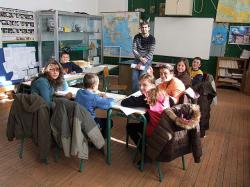 The German language and immigrant children’s mother tongue are equal, and for this reason they both have to be cultivated from a young age. This was the conclusion of a specialist conference that was recently held by professor Maria Böhmer, Minister of State in the German Chancellery and authorized for integration issues.

Dr Petra Stanat and Dr Rosemary Tracy, representatives of immigrant organizations and Linguistics professors, presented the findings of their researches. They said self-confidence and cultural identity are inextricably connected to language, while children are able to learn two or more languages simultaneously.

“It is of immense importance to provide children with the chances to learn their mother tongue, not only at their home and school, but at preschool too,” both professors underlined.

The President of the Federation of Greek Communities of Germany, Kostas Dimitriou, welcomed the scientific conclusions and asked for the introduction of a mother tongue course in German schools, which will be of equal importance as other courses. Böhmer stated that she will do what is necessary for the implementation of these projects.

She reminded that forty years earlier it was dominant among immigrants the opinion that their children had to focus on their mother tongue because the family planned to return to their home country eventually. At that time, educators maintained that a child could learn only one language satisfactorily, and this language had to be the language taught at school, German. “Only today we understand that both languages are equal and have to be promoted simultaneously,” she said.