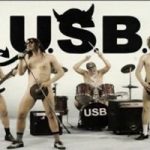 The economic crisis of Cyprus has  become the source of inspiration for Russian artists. The very popular group of rap United Sexy Boys, (USB,) motivated by the economic and political situation of the island wrote a song that immediately became a hit.

The song is titled ‘Oh Cyprus’ and it is a satiric look about the recent events and their consequences for Russian depositors who stand to lose scores of millions of euros being confiscated by the government.

Although the song is written with a sense of humor, the anger and the disappointment of Russians over the so-called “haircut” they are being forced to take is obvious.

In a very characteristic verse, USB compares the economic measures with the fall of the Soviet Union when they were, as they say, victims of a grand theft.

Below is the official video clip of the song: