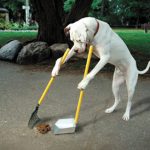 The Greek government, which is stepping up  its campaigns against corruption and tax evasion is going after people who let their pets foul the streets and parks too, with fines of up to 30,000 euros ($38,800) set to come into effect on April 8.
The penalties – which start at €100 ($130) for owners who do not clean up after their pets in parks or on pavements – are due to be handed out by the city’s municipal police officers.
According to the City of Athens’ Deputy Mayor in charge of municipal police matters, Yiorgos Anagnostopoulos, the fines will be handed out strictly – and the policing will eventually spread to surrounding municipalities.
He said violating pet owners will be penalized as well for leaving their animals unattended for long periods on balconies, or for relatively minor offenses such as digging up greenery.
Municipal police will also, according to Anagnostopoulos, monitor – and if necessary withdraw the license – of pet shops for failure to give their animals the correct inoculations or carry out other veterinary requirements.