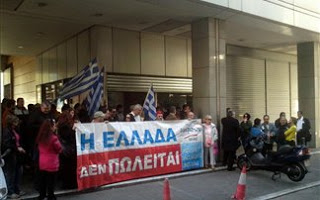 Envoys from Greece’s international lenders were heckled by protesters who screamed “You’re murderers,” at them as they left the finance ministry and as negotiations with the government were delayed amid reports of a deep division between the two sides.
The first day of meetings on April 4 did not go well, with Finance Minister Yiannis Stournaras reportedly unable to make any headway in the government’s stance that it doesn’t want to fire 25,000 workers this year as a major stumbling block, according to Kathimerini and ENet.
He met with International Monetary Fund mission chief to Greece Poul Thomsen, the European Union’s Matthias Morse and the European Central Bank’s Klaus Masuch, who make up the Troika which is putting up $325 billion in two bailouts but has insisted on harsh austerity measures in return.
After leaving, Stouraras told reporters that all the issues “are on the table” and added that, “Nothing will be closed unless everything is closed,” referring to unresolved issues, such as whether the government will have a unified single property tax to replace two it now uses, one of which is attached to electric bills under threat of having power turned off for non-payment.
The other key issue is bank recapitalization and the Troika’s opposition to a planned merger of the National Bank and Eurobank, which would create the nation’s largest lender and which the envoys feel would be too big compared to the country’s Gross Domestic Product (GDP.)
On the eve of the inspectors’ arrival, the coalition party leaders appeared to reach a compromise on the levy continuing until the end of the year to be raised through electricity bill payments before handing the duty over to tax officers next year. The Troika has delayed release of a 2.8 billion euros ($3.5 billion) installment that was due in March until it’s satisfied with the lagging pace of some reforms.
“The negotiations for the next loan installments are still very difficult,” said Stournaras. “I can assure you that things are not simple at all.”