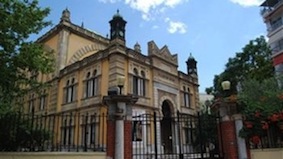 A 111 year-old mosque in Thessaloniki, Greece has opened its doors to Muslim worshippers for the first time in 90 years at at the same time a planned mosque in Athens is moving closer to reality and as Turkey continues to prohibit the opening of the Halki Seminary which was shut down 42 years ago.
The Thessaloniki mosque allowed worship again on March 30, according to Hürriyet Daily News. Kerin Uras, Turkey’s Ambassador to Greece, said that reopening the mosque is “a positive step in the right direction. We’re expecting the rest to come. I hope Athens will also be a place where Muslims can pray.”
Tuğrul Biltekin, Turkey’s Thessaloniki Consul General, said “I am so happy about this historical development. I hope mosques in Thessaloniki and other locations in the region will be open to Muslims during holy days.”
The Mosque was constructed by Vitaliano Poselli, an Italian architect, in 1902. However, it was closed for prayer in 1923. Between 1925 to 1963 the mosque was used as an archaeology museum and was later used as the Thessaloniki Municipality’s exhibition hall.
An important step for the construction of the first mosque in Athens is being made through the publication of the project to Diaugeia program by the Ministry of Development, Competitiveness, Infrastructure, Transport and Networks, according to the newspaper Kathimerini. The mosque will be built on Navy land next to the Sacred Way, Votanikos.
Athens’ some 30,000 Muslims, without an official mosque, have to pray in about 120 makeshift places of worship, such as basements while waiting for the Greek government to build them a mosque. The building site has five derelict buildings, one being turned into the mosque. The mosque will have a capacity for 350 worshippers. In the outdoor there will be a courtyard to be used for worship as well.
The other four buildings will be demolished and next to the central area will be constructed several facilities and toilets. In the same area there will be Imam’s offices and offices for the members of the Executive Committee of the mosque, which will include seven members, consisting of representatives of the Ministry of Education, of Athens Municipality, academics and two representatives of the large communities of Muslims of Greece .
(Christina Flora contributed to this report)