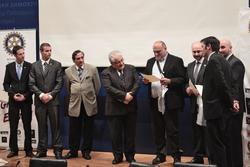 Spanish teachers and students created the video “Gracias Grecia, Nuestra herencia” (Thank you Greece, Our Own Heritage) showing in that way their sympathy and solidarity towards Greece. This video can be found on the internet nearly from the beginning of the year.

“This is an action of revolt, an outburst of dignity against the Spanish Government’s attack of abolishing Hellenistic and other humanistic studies’ courses from Secondary Education in Spain, for financial reasons”, Aristides Minguez Banos, teacher of Latin and among the creators of the video said impeccably in Greek.

The Alternate Minister of Education, Religious Affairs, Culture and Sports, Kostas Tzavaras welcomed the creators and producers of the seven-minute video in the Ministry of Culture at a special event that was organized in cooperation with the Rotary Club of Agia Paraskevi and Ilisia. The Minister thanked and honored them for their gesture.

Teachers and students from a technical high-school in Murcia, Spain expressed from the bottom of their hearts their thanks for everything that Greece has offered to humanity, from ancient time until today, in every domain, such as the alphabet, the philosophy, arts, medicine and athletics.

The aforementioned teacher of Latin said that there would be no politics, no democracy, nor arts without Greece and exalted great Greek personalities as Kavafis, Elytis, Kallas, Theodorakis and Hatzidaki. He thanked Greece for everything and pointed out that they are proud of Greeks.

Tzavaras stressed out among other things: “Hard times have put Greek and Spanish people in the same category of the financial crisis’ victims under the powerful” and added: “What they do not know is that Greeks and Spanish are brothers and sisters. They are children of the same civilization. They are brothers and sisters because they defend the foundations of the European Union, the cultural podiums on which the current edifice was built.”