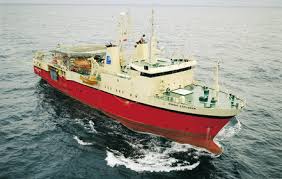 The Norwegian seismic surveys in the waters of the Ionian islands and Crete showed that these areas are rich in oil and natural gas. The results were confirmed yesterday by the Ministry of Environment, Energy & Climate Change stating that “sharp and interesting geological structures for identifying potential hydrocarbon reserves in the Ionian Sea and the sea area south of Crete arise from this survey.”
Researchers found hydrocarbons in 30% of the samples in a marine area of 225,000 square kilometers.
On April 1, the Minister of Environment, Energy and Climate Change, Evangelos Livieratos, met with members of the General Directorate of Petroleum Affairs to discuss the schedule and stages of the program, as well as the processing and analysis of the geophysical data collected by the research vessel «Nordic Explorer» of the PGS Company.
The project aims at opening a tender for giving maritime “land” for research in the first six months of 2014. The contracts for the concession of three regions (Ioannina, Gulf of Patras and Katakolo), which were launched in 2011, are expected to be signed soon, as negotiations with the companies that have been selected, will be completed in late May.
According to the journal Ta Nea, the first evidence of Greek oil reserves will attract major oil companies such as French Total or the U.S. Exxon Mobil, which are already in discussions with the Norwegians.

Dogs Can Tell Difference Between Familiar and Unfamiliar Languages