Schaeuble: Cyprus is a "special case" 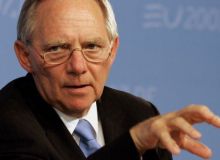 German Finance Minister Wolfgang Schaeuble has said savings accounts in the eurozone are safe, adding that Cyprus is a “special case” and not a template for future rescues.
In an interview with Bild newspaper published on Saturday, Schaeuble distanced himself from comments on Monday by Eurogroup chairman Jeroen Dijsselbloem, who said the rescue programme agreed for Cyprus – the first to impose a levy on bank deposits – would serve as a model for future crises.
“Cyprus is and will remain a special one-off case,” Schaeuble said. “The savings accounts in Europe are safe.”
Schaeuble said the problem in Cyprus was that two large banks in Cyprus were in effect no longer solvent and the Cyprus government did not have enough money to guarantee savings.
“That’s why the other eurozone countries had to help,” he said. “Together in the Eurogroup we decided to have the owners and creditors take part in the costs of the rescue – in other words those who helped cause the crisis.”
Schaeuble said he was confident Cyprus would be able to completely pay back the help. “Cyprus’s economy will now go through a long and painful period of adjustment. But then it will pay back the loan when it is on a solid economic foundation,” he said.
Schaeuble said the euro was stronger today than at any time since 2010.
“Yes, you could see that during the Cyprus crisis,” he said. “The entire turbulence did not have any impact on the other countries in southern Europe.”
He said it was different in early 2012, when elections in Greece caused interest rates across southern Europe to rise.
“The financial markets have seen: we are better prepared now. We’ve accomplished quite a bit,” Schaeuble said.
He said he was against thinking about individual countries leaving the eurozone.
“What is more important is that we are strong enough to keep everyone in the boat,” he said.
“I believe that we will one day read in the history books about this period that the crisis brought Europe even closer together,” he said, adding the continent was currently enjoying “a very fortunate era.”
(source: VOA)