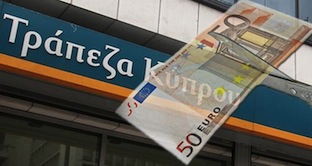 Depositors with more than 100,000 euros ($130,000) in uninsured accounts at the Bank of Cyprus stand to suffer big losses under a restructuring plan devised as a way to confiscate their holdings and trigger release of a 10 billions euros ($13 billion) bailout.
They will get shares worth only 37.5 percent of their deposits, an unnamed source told Reuters, while 22.5 percent of deposits over the insured limit will accumulate no interest and the other 40 percent will be paid interest only if the bank prospers.
Conditions of the conversion of deposits into equity, a pre-requisite for Cyprus receiving bailout funds from the Troika of the European Union- International Monetary Fund-European Central Bank (EU-IMF-ECB) were expected to be revealed on March 30. Cypriot officials have already said that Cyprus Popular Bank (Laiki) will be closed, with its assets transferred to the Bank of Cyprus, the island’s largest bank.
Those with deposits under $130,000 will continue to be protected under the state’s deposit guarantee for now although the original plan backed by newly-elected President Nicos Anasastiades – which he had opposed while campaigning only a month earlier – would have seized 6.75 percent of those monies as well.
Meanwhile, it was announced that Cyprus’ stock exchange may resume limited trading on April 2 after closing for more than two weeks. “We may resume trading on a number of stocks, but this is not something which we can say with 100 percent certainty,” said CEO Nondas Metaxas.

The Greek word "kosmetika" is the root of the English word ‘cosmetics.’ The word also meant any product that protected the hair and face.
Crime

Convicted terrorist Dimitris Koufodinas, who has been on hunger strike for 45 days announced on Monday he will stop drinking water too.
Diaspora