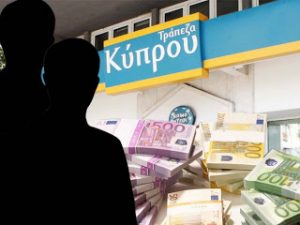 With banks confiscating up to 80 percent of uninsured deposits over 100,000 euros ($130,000) and the country facing a deep economic crisis, Cyprus has forgiven loans to politicians and companies while others are generally being required to pay in full, media reports said, setting off fury on the island country.
The Greek newspaper Ethnos and the website 24h.com.cy said that loans to Members of Parliament from the three major political parties and other officials in the public administration from the Bank of Cyprus and Cyprus Popular Bank (Laiki) will be written down or off.
The list includes former and current politicians, wives and relatives whose debt will be excused while the banks chase others to pay their loans. It was not said whether the government or bank officials drew up the list of those who will be given preferential treatment and who won’t have to pay, essentially having received free money they can keep or spend as they wish.
The list including the names of those who managed to have their debts deleted is before the Parliamentary Committee on Institutions which will review it although it includes people they may know. There was no information on whether that would create a conflict of interest in their eyes. The privileged will be required to show why they were getting favorable treatment.
The Investigative Committee consists of three judges and will investigate who granted politicians immunity from debt. The president of the Committee is Georgios Pikis and members are Panagiotis Kallis and Giannakis Konstantinidis.
The Attorney General, Petros Klerides, who is in charge of any prosecution on the state’s behalf, has the list that is said to include eminent Cypriots, politicians and businessmen, who took loans from the banks that are being written off.
The list from website 24h.com shows the write-offs include:
“Written-off loans of specific groups of individuals (Board of Directors members, Senior Executive Management and Politically Exposed Persons).”
Indicative examples for deleted loans by the Bank of Cyprus:
-Hotel Company “T.H.E.”, controlled by the Progressive Party of Working People (AKEL)-PEO. The total loan of €2.813.000 was written off on May 2012.
-The Pancyprian Labor Federation (PEO) was granted €193.000 out of a €554.000 loan on May.
-A company that belongs to the brother of a former minister of the Democratic Party (DIKO). The loan written off was up to 1.285 million euros ($1.647 million)
-Former MP of the Democratic Rally (DISY), S.H. -loan up to €26.000.
-Former minister and official of DISY, T.H. -loan up to €399.000 was written off in 2007 and 2008.
Hellenic Bank wrote off:
-A loan up to €543.000 in a company which belongs to a former MP of a small party.
Indicative examples for deleted loans by the Cyprus Popular Bank (Laiki):
-A.G., former MP of AKEL-loan up to €39.000 in 2012.
-A.G., former MP of DISY-debt up to €71.000 in 2011.