Prosecutors Charge 20 In Gold Mine Attack 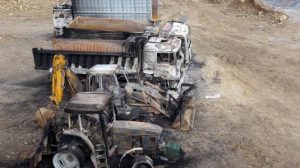 Twenty residents in Northeast Halkididki’s village Skouries have been prosecuted for an attack against the Skouries gold mining site being worked on by a Canadian company, Eldorado Gold, with its Greek subsidiary, Hellenic Gold.
During the Feb. 17 incident, some 40 to 50 masked men set fire to facilities at the mine. After torching bulldozers, trucks and port cabins belonging to the company, the group used tree trunks to block police and firefighters from reaching the site.
Halkidiki Prosecutor Magdalene Galatali indicted the defendants on charges of setting up a criminal organization, attempted manslaughter, possession of explosive materials and arson. Seven were felonies and 11 were classified as misdemeanors.
The accused are residents of Ierissos and Megali Panagia. According to the statements, their lawyers said they denied any involvement and criticized the police.
A DNA sample taken from one of the accused was matched to the DNA found on a woolen hood that was recovered from the mining site after the assault. The subsequent ballistics test also showed that a rifle owned by the suspect was also used in the assault, according to To Vima.
During the police investigation the police tapped the telephones of dozens of residents in Northeast Halkidiki. However, there aren’t any taped conversations between the suspects, only telephone contacts registration.