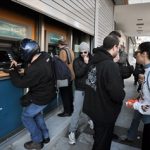 Just ahead of the banks reopening on Cyprus on March 28 for the first time in two weeks while the government worked out a deal with international lenders that has led to the confiscation of as much as 80 percent of uninsured deposits, The European Commission said the capital controls to prevent a flight of money from the island are okay but shouldn’t last too long.
“Member States may introduce restrictions on capital movement, including capital controls, in certain circumstances and under strict conditions on grounds of public policy or public security,” the Commission said in a statement. “In accordance with the case law of the European Court of Justice, measures may also be introduced for overriding reasons of general public interest.
“Such exception to the principle of the free movement of capital must be interpreted very strictly and be non-discriminatory, suitable, proportionate and applied for the shortest possible period,” the EU added. Brussels said the capital controls are planned to last for seven days and that it would monitor the restrictions closely over the next few days.
“The Commission will insist at all times that any restrictive measures are strictly proportionate to the legitimate objectives of preventing the immediate risk to the financial stability of Cyprus and strictly limited in duration to the time necessary for that purpose. While the imposed restrictive measures appear to be necessary in the current circumstances, the free movement of capital should be reinstated as soon as possible in the interests of the Cypriot economy and the European Union’s single market as a whole.”
Cypriot officials, fearing a run on the banks, and with the closing of the Laiki Bank, have set tight conditions for the movement of money and banned cashing checks and limited how much can be sent abroad either in person or by transfers. Withdrawals are also being limited at ATM’s as well.