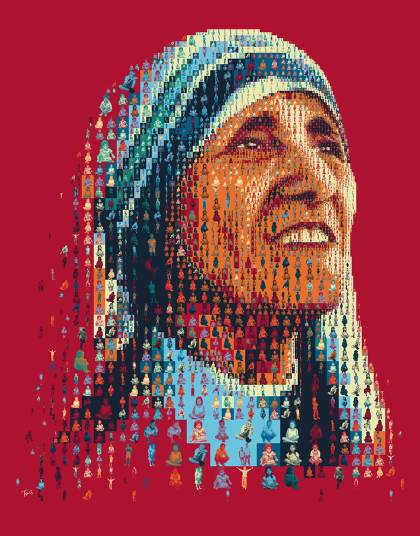 A digital mosaic portrait of Mother Teresa crafted by internationally renowned Greek visual designer Charis Tsevis will decorate Tirana Square named after the ethnic nun and founder of Missionaries of Charity. The visual image was donated by Greek ambassador in Tirana Leonidas Rokanas to the Minister of Tourism, Cultural Affairs , Youth and Sports of Albania Aldo Bumci.

During a special ceremony-press conference held in the Albanian capital, Minister Bumci noted that Mother Teresa is a world-known figure who dedicated her entire life to provide help where it was needed, and stressed that this move is further evidence of the excellent relations between the two countries and their peoples.

Rokanas said that Mother Teresa was not only a major figure in Albania, but a personality with universal and global radiation, and that her way of life and especially her work set an example and an ideal standard of living.

During the presentation of the portrait, Tsevis stressed that Mother Teresa was and remains a personality transcending geographical, religious and ideological constraints and speaks to the hearts of the people. The visual artist also explained that the portrait of Mother Teresa is one of his finest works, based on two components: children symbolizing hope and colors being part of the light and energy that humans see and experience.

Greece recorded 1,784 coronavirus cases Thursday, out of the 50,247 Covid tests that were conducted in the country during the day.
Greek Food