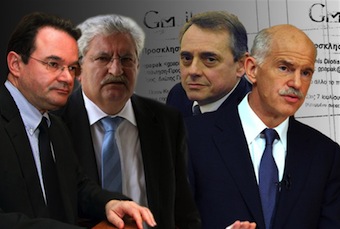 Greece’s former Head of National Intelligence Service (EYP,) Costantinos Bikas, has been called to testify before a parliamentary committee investigating the removal of the names of three relatives of former finance minister George Papaconstantinou from a list of 2,602 Greeks with $1.95 billion in secret Swiss bank accounts that hasn’t been checked for tax evaders.
That comes in the wake of the former head of the financial crimes squad (SDOE) Yiannis Diotis reporting on contacts between Papaconstantinou and former prime minister George Papanadreou over the list that is named for former French finance minister Christine Lagarde, who gave it to Papaconstantinou in 2010. He said it disappeared and has denied any wrongdoing.
Greek media reports said that Bikas had stated complete ignorance so far despite claims that Papandreou was informed only at the arrival of the material from Lagarde. The committee heard that Papaconstantinou sent the list to Diotis only after the leaving the finance ministry to become the Environment Minister. He had been replaced by Evangelos Venizelos, now head of the PASOK Socialists, who is not being investigated even though he too had the list and refused to act on it.
Christos Markogiannakis, the President of the Preliminary process, said the panel could summon Papandreou, who is still a Member of Parliament although he spends much of his time in the United States teaching at college about the Greek crisis. There were reports though that Papandreou would be allowed to send a letter without appearing himself so that he doesn’t have to be questioned.
Meanwhile, Members of the Parliament decided at their yesterday meeting to ask for an extension of the preliminary work of the Committee investigating the Lagarde list’s case until April 15 after having already been extended once to March 29 so that it can have more time to call witnesses.