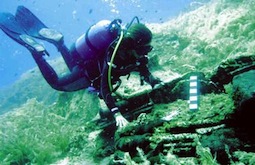 By Christina Flora
A series of important archaeological findings has gradually been unearthed by the sunken submarine research in the Heraklion port located in ancient Egypt, the last years, according to announcements made at an international scientific conference at the University of Oxford.

The coastal city on the delta of the Nile, called Heraklion by Greeks, and Thomis by Egyptians, was an important gateway to Egypt during the first millennium BC, while now having sunk, it is located approximately 6.5 km from the coast. According to the latest evidence, before the founding of Alexandria, it was one of the greatest commercial hubs in the Mediterranean.

Researchers of the Oxford Centre for Maritime Archaeology (OCMA), in collaboration with the European Institute of Underwater Archaeology (IEASM) and the Department of Antiquities of Egypt have been conducting underwater researches in the region since 2000, and every year new data comes to light.

‘Surveys have revealed a huge submerged landscape with remains of at least two major ancient settlements in a part of the Nile, where natural and artificial navigable channels intersected’ Dr. Damien Robinson, director of the Oxford Centre for Maritime Archaeology said.

Excavations in the Heraklion area have brought to light many findings including, as stated by the researcher of Oxford, Elizabeth van der Vilt, weights from ancient Athens.

Another Oxford researcher, Sandra Heids, has examined more than 300 statues and amulets, dating from the Late and Ptolemaic period depicting Egyptian and Greek figures. Like the ships, these findings have also been maintained in excellent condition and most of them depict deities such as Osiris, Isis and Horus.

According to the researchers, such statuettes and amulets were massively produced, mostly for Egyptians, though several of them were purchased by foreign visitors as well (traders, etc), who used to devote them to several churches in their countries.

Over 100 Homes Destroyed, Damaged by Fires in Greece

New York City Will Not Mandate Masks Indoors for Vaccinated