Cypriot Bankers Fear For Their Lives 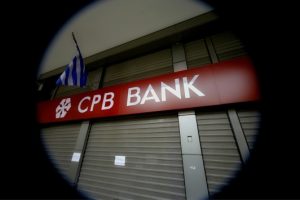 Cypriot officials from the now-defunct Cyprus Popular Bank who testified before the European Parliament said the bank crisis in their country allegedly involved the transfer of billions of euros to Greece but refused to name any culprits, saying their lives were in danger if they did.
Chairman of the Board Andreas Philippou and members Marios Hadjiyiannakis and Nicos Hadjinicolaou, who undertook the administration of the bank last June said they have specific data that show “involvement in the scandal of a group of people who passed by the administration of the bank,” according to the newspaper The Liberal.
The President of the House of Representatives, Yiannakis Omirou and the Attorney General Petros Klerides, were hastily called and Klerides said that the Board Members are obliged to submit this data to the Parliament. Omirou though said any information the Cypriot Parliament receives will be kept secret.
CPB Bank, also known as Laiki Bank, folded this week as part of a government scheme to confiscate up to 80 percent – possibly 100 percent – of depositors money on the demand of international lenders who are putting up 10 billion euros ($13 billion) in loans to bail out Cyprus’ economy after the banks lost 4.5 billion euros ($5.75) billion in bad loans to Greek businesses that went under and in the banks’ holdings in Greek bonds that were devalued 74 percent. No one has been accountable but the government said bank depositors will have to help pay for the crisis.