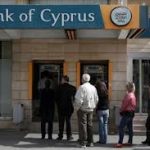 Cypriot officials said on March 26 that with banks not scheduled to reopen until March 28 that the government and businesses won’t be able to pay workers, which has led to shortages of commodities as well, including food and fuel.
Government officials said they were talking with Central bank authorities to determine when and how people will be getting paid, although there are capital controls in place to prevent a run on the banks and limit withdrawals, which has cut into the ability of businesses to operate and get goods.
The banks on Cyprus have been closed since March 15 while the government worked out a deal to get a 10 billion euros international bailout that will confiscate up to 40 percent of the deposits of account holders with more than 100,000 euros ($130,000) to pay for the bad loans banks gave Greek businesses that went belly-up in that country’s crushing economic crisis and 4.5 billion euros ($5.78 billion) in losses in holdings in Greek bonds that were devalued 74 percent.
Customers have been limited to 100 euros ($130) per day in withdrawals from ATM’s, virtually shutting down business transactions and preventing people from having access to their money. It’s also meant that businesses and the government can’t pay workers for now.