GRNews
GreekReporter.comHollywoodTom Hanks on 25-Years with Rita Wilson: 'Part of it is Her...

Tom Hanks on 25-Years with Rita Wilson: ‘Part of it is Her Great Greek Heritage’ 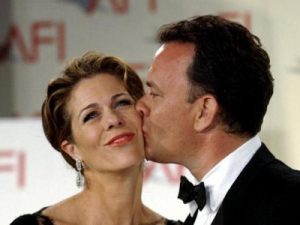 Tom Hanks, whose lengthy career in the entertainment industry has been welcomed with numerous awards, sat down recently with television host Piers Morgan to discuss his new venture onto Broadway. While chatting about his performance in Nora Ephron’s “Lucky Guy,” Hanks also got candid about his 25-year marriage to Greek-American Rita Wilson.

“We’ve been married for 25 years and it seems like we’ve been married 2-and-a-half to me, it’s blown by so quick. And we have two more kids and four of them all together and I tell you every day is fun. Every day is a blast with Rita Wilson,” Hanks said in the interview.

He went on to describe Wilson as having a “mirthfulness,” and said, “part of it is, she has a great Greek heritage, with a tightly knit family in which everybody gets to say any damn thing they want about the other person at the table.”

Check out the interview: