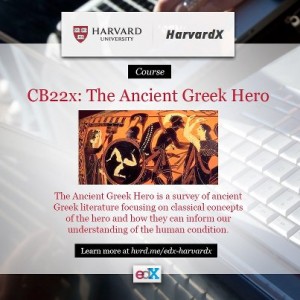 Harvard University is asking alumni who had taken an online course to become volunteers as online mentors and discussion group managers and is offering a free on-line humanities course under the title The Ancient Greek Hero, the New York Times reported.

The class taught by Harvard classics faculty member Gregory Nagy has been a popular offering since the late 1970s which has been taken by some 10,000 students.

The online version, which began last week and will run through late June, has 27,000 students. Its syllabus includes Homer’s Iliad and  the Odyssey, dialogues by Plato, poetry by Sappho and other works.

Claudia Filos, editor of content and social media for the course stated that, “The hope for the Greek heroes’ class is to have enough people monitoring -asking pointed questions, highlighting smart comments -to prevent that from happening.”

Nagy also said that about a dozen people, including Filos, were involved in creating the course and that about 10 academics from Harvard and elsewhere will help review and rate some of the students’ work. Most of the assessments will be done by fellow students, an approach taken in many other MOOC’s.

Most Harvard MOOCs have been in technical and scientific fields, with some in the social sciences. Starting with the Greek heroes’ course, the university will also provide an array of humanities classes. EdX courses, like most MOOCs, are free and do not offer any credits, but students can earn a certificate of completion.