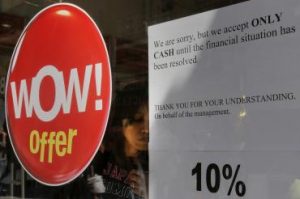 Cyprus’ sudden acquiescence to demands by international lenders to confiscate 40 percent or more of bank deposits over 100,000 euros ($130,000) and limit withdrawals, while keeping the banks shut, has turned much of the country overnight into a fright-filled society with many people unable to get their hands on enough cash to pay for anything except food.
The government gave in to the harsh demands from the Troika of the European Union-International Monetary Fund-European Central Bank (EU-IMF-ECB) to secure release of a 10 billion euros ($13 billion) bailout but the terms were harsh for ordinary citizens.
Withdrawals at ATM’s remained limited to 100 euros ($130) per days while the state banks were to stay shut until March 28 to prevent a run on the banks with big depositors having lost trust in the banks and those with under 100,000 euros that were guaranteed against loss fearing the government might be coming after their money next.
Credit cards weren’t being accepted because businesses believe they won’t be paid, making the instruments as worthless as the plastic of which they are made. Checks weren’t being accepted either as Cyprus has become a cash society, even if most people are cashless.
Thousands of businesses could close because of capital controls that will be put on the banks, limiting withdrawals to prevent a run on the banks and as depositors with more than 100,000 euros ($130,000) will have 40 percent or more of their money seized by the government, although those with deposits in Laiki Bank could lose everything.
Cypriot students abroad have been cut off from money and can’t even afford to return home for now.  Patients can’t get medicine because pharmacies are only accepting cash – which people can’t get, and drug companies are refusing to supply drug stores unless they get paid – in cash – which the pharmacies don’t have.
Many store shelves are emptying fast as people are using whatever cash they have to buy survival goods and food. Within a few days, Cyprus has changed from an island paradise attracting tourists and rich foreigners to near-beggars lining up at ATM’s and hoping to have enough money to get by.
Once-busy streets and shopping venues were void of customers because people don’t have cash to buy almost anything, leaving restaurants and taverns to suffer too and people wondering what will happen to the summer tourist season if visitors are scared off by the prospect they won’t have access to money.
Cypriot factory owners said that they don’t have access to money to pay salaries because the government won’t allow them to get money from the banks.  The organization of workers and factories on Cyprus (OEB) called on the government to open the banks but they aren’t scheduled to open again until March 28.
The government is calling for calm as anxiety is building as even when the banks open there will be strict limits in withdrawals, not enough for them to be paid so they will have to go without their salaries for an unknown period.
The Deputy General Manager of OEB, Konstandinos Christofidis, said, “For sure, businesses can’t make payments and they can’t pay workers and this creates a lot of problems in society and the economy.”
He admitted credit cards are just about useless on the island now, although he said some stores are accepting them. “We hope the banks open on Thursday (March 28) the latest,” he said. He added that, “What we had reported last week is that every day that goes by the damage to the economy and businesses increases.”
The President of the Bank of Cyprus’ Council, Andreas Artemis, surprisingly quit his post. The blog StockWatch said that he resigned because the government had appointed an overseer without notifying him, the selling of the banks branches in Greece and the forced withdrawal of 9.2 billion euros ($11.84 billion) to compensate for emergency liquidity funding from the European Central Bank.
I haven’t felt so uncertain about the future since I was 13 and Cyprus was invaded,” 53-year-old nursery teacher Dora Giorgali told Reuters just before the deal was reached that made life worse for her. Giorgali lost her job two years ago when the school she worked at closed down. “I have two children studying abroad and I tell them not to return to Cyprus. Imagine a mother saying that,” Giorgali said.
Echoing the words of a former PASOK Socialist party stalwart in Greece, Theodoros Pangalos, who said, “We all ate it together,” blaming workers as well as the government for his country’s economic disaster, Averof Neophytou the Deputy Chairman of President Nicos Anastasiades’ ruling DISY party apologized to Cypriots but didn’t absolve them from the crisis the banks created. “We all share the blame,” he said, without explaining why.