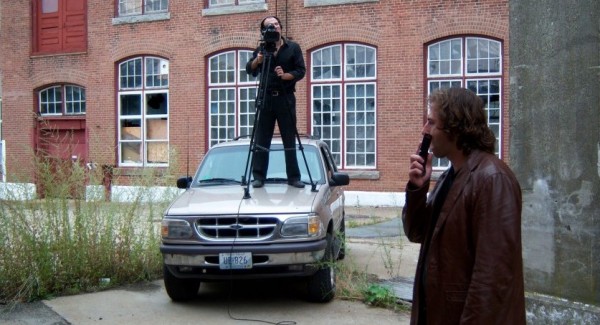 Brothers Evangelos and George Giovanis have finally settled into Los Angeles. After moving around as kids – from Rhode Island to Greece (their parents are from Ioannina and Nafplio), and then back to the States – the two Greek-Americans are making their mark in Hollywood with their latest film, “Run It.”

The businessmen-turned-filmmakers got their start making pizza, opening up shop in places like Florida and Arizona, and then sold the businesses in order to support their love for making movies. So far, it’s worked to their advantage; one of their earlier films, “Land of Nod,” won the Digital Alexander Award at the Thessaloniki Film Festival and was nominated for Best Feature at the Cyprus International Film Festival.

Now, with their third film, “Run It,” which features industry vets like Louis Zorich (“Fiddler on the Roof,” “Death of a Salesman”) and the late Sam Coppola (“Saturday Night Fever,” “Fatal Attraction”), the Giovanis brothers are getting in front of, and behind, the camera. Centering on two thugs, a substitute teacher, and a young student who get tangled up in violent crimes that unexpectedly bind them together in one day, “Run It” has already screened at six film festivals, including the Los Angeles Greek Film Festival and New York Greek Film Festival.

Greek Reporter caught up with Evangelos to talk about the new film. George also joined in on the conversation to discuss what it’s like to work with family – day in and day out – not only in business, but also when it comes to filmmaking.

At what point did you decide you didn’t want to work in the pizza business anymore and make movies?

Evangelos: We always knew we wanted to make movies. I mean, we make a hell of a pizza, don’t get me wrong. We just kind of knew, [when] we were in Florida, that’s when we started making the films. And then we made one in Arizona and when we sold that one, we continued to make them. We made [‘Run It’] in Rhode Island. We just kind of knew that’s what we wanted to do. The problem is, both businesses are risky. I’ve read entertainment is the hardest, and restaurants is the second hardest…we’re kind of always in the toughest businesses. 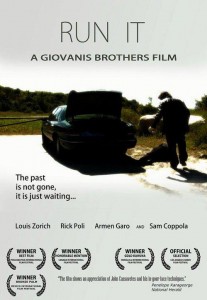 How did you get into filmmaking?

Evangelos: [‘Run It’] is actually our third feature. We threw ourselves in the deep water without knowing how to swim first. We didn’t make any shorts, basically, we just said, ‘Why not make a feature, and that’ll be like 10 shorts.’ That was our logic with things. I took a couple of [film] classes at the University of Rhode Island with a great teacher, her name was Sheri Wills. But other than that, we didn’t get into a graduate program, so we just picked up a camera; we tried to learn that way, self taught and we kept going.

The first movie…we learned the most from it, we made the most of it. The second movie, we premiered at the Thessaloniki International Film Festival and we picked up the Digital Alexander Award for Best Picture in 2006.

How did you come up with the idea for “Run It”?

Evangelos: It’s strange you should ask. I didn’t have one set thing at the time. A great uncle of mine had suffered from a stroke, and it got my brain thinking, and I had seen some things in Providence – some random acts of violence. It’s a melting pot of things that happened; it’s not just one idea. The stories are just born in my head and I work on them till they feel like they’re ready to go. It’s not even the same process with each different story, I think even the inspiration of how you go about it changes every time, not only the stories you write.

How long did it take to complete the film?

Evangelos: It took me about a month and half or two to write. It took 40 days to shoot it, and then it took us about six months to edit because the editing process had a little adventure in it. At the time, we were in Rhode Island and we had run completely out of money, and friends of ours told us to go live with them in Chicago. We did and we were living in a basement, and we were editing there. I was worried because they were like, ‘Oh, by the way, in Chicago, the basements flood.’ And I said, ‘By the way, my whole life is in this basement.’ So we moved. It was a rough time.

How did you end up financing the film?

Evangelos: I told my brother we should sell the restaurant [in Arizona] and we should pursue more time into the movie. We would work six days a week in the pizza place, 10 hours to 13 hours a day. On the one day off we would close, that’s the day we were shooting our movie.

‘Run It’ is our most expensive movie to date, so we invested our savings into that one and we’re trying to get a distributor. We ended up getting offers on it after we did our festival run, but the offers were no good. The entertainment attorney we had at the time advised us not to take them, because they were not giving us a good VOD and DVD deal. So, my brother and I refused the offers as tempting as they were…we ended up getting on Indiegogo and we raised $11,000 and now we’re taking that money and we’re doing a premiere in Los Angeles on April 21 at the Los Feliz 3 Cinemas at 6:15pm; it’s a one night screening. We’re also screening for a whole week in New York City at the Cinema Village from May 31 to June 6.

What’s it like having your brother work with you on a film? Is it tough working with family on-set?

Evangelos: Look, my brother is my best friend. I’m fortunate, and I say this from the womb to the grave, I love my brother and I wouldn’t work with anybody else. He makes my life easier, not harder. And OK, we all have shortcomings….

George: Speak for yourself!

Evangelos: …but we compliment each other well. Where I lack something, he gains, and where he lacks something, I gain. We have outtakes and bloopers on DVD, which is hopefully gonna come out. We have bloopers where we’re swearing up a storm at each other. But that same night, we’re out having a gin and tonic and saying, ‘What a great shot,’ and hugging each other.

George: I love this guy and everything we do, we’re basically one person divided into two. It’s just a formula we’ve applied to life in general. We just always push forward together. Just don’t mess with my food; the only thing I don’t share is my food.

For more information on “Run It,” and to get tickets to screenings in Los Angeles or New York, visit: www.runitthefilm.com