The military parade marking Greece’s Independence Day on March 25 took place amid a heavy police presence that barred onlookers from most of the route.
The center of Athens reminded of an impregnable fortress, with 14 police vans around the lower end of Syntagma Square, while the circulation prohibition started from Alexandras Avenue. In the capital, 4,000 policemen made their presence felt and all the police forces of Attica Basin were on guard. Riot police squads were guarding closely the grandstand, while railings and iron barriers existed all along the military parade route.
In the morning, Prime Minister Antonis Samaras, had pointed out in a message to mark the 192nd anniversary of Greece’s Independence Day: “We only have to look back at recent history to see how many obstacles we have managed to overcome. And we have always emerged stronger as a nation, better as a society, more proud about what we are and more confident about what we can achieve.” He urged Greeks to “stay clear of divisive slogans, the fatalism of submissiveness and national inferiority complexes” and he said that “Greeks can achieve everything as long as they remain
united and stand tall.”

In Piraeus, the security measures during the school parade were strict, but not as tight as those taken in Athens. The residents of Piraeus watched the National Day parade behind the railings that have been put along the pavements and the central roads. An individual from the Resistance block yelled: “Similar to 1821’s heroes, you should be men towards any Troika,” when passing in front of the grandstand.
At Skouries in Chalkidiki, students participated in the parade wearing masks and t-shirts with slogans against a gold mining project to show their opposition to gold mines in their village.

At Pyrgos in Ilia, incidents and tension took place after the parade finished between students, citizens and the police. Previously, less severe incidents were noted at Kokkinou and Manolopoulou streets, where two individuals were taken to the police station. Students of the Technological Institution (TEI) of Pyrgos had called through the social media for a mobilization during the parade and gathered there, carrying banners and flags. The deputy of Syriza, Georgopoulou-Saltari Efi joined the students. A pupil from the 2nd Lyceum raised her fist, while several others turned their heads away when passing by the grandstand. 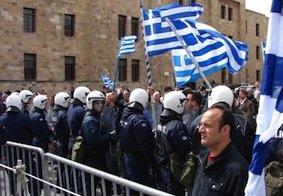 On the island of Rhodes, the Independence Day parade turned bloody. A woman reportedly stabbed the member of the city council, Dimitris Karatzias, shortly after the parade concluded. She was arrested and led to the police subdivision. During the parade, she had been among protesters yelling at politicians. The councilor was  hospitalized but reportedly didn’t suffer serious injuries. At the same time, the police commander of Rhodes, Giorgos Georgakakos, under the Police Chief of the Dodecanese islands, Antonis Vlahakis’ command, spoke harshly to protesters and took a flag out of the hands of one. This came after a group of protesters verbally attacked local and regional politicians. The protesters got angry and one of them punched Georgakakos in the face as riot police moved in to bring back the law and order.

In Loutraki, incidents and pandemonium were noted during the laying of wreaths. When a representative of the neo-Nazi Gold Dawn party, Stathis Boukouras was to lay the wreath, onlookers began yelling and tried to stop him. Within seconds, police intervened and went after protesters and fired teargas. When this incident came to an end and it was the Police Commander of Loutraki, Haralambos Tetradis’ turn to lay a wreath, he literally threw the wreath, yelling “Shame on you!” and was said to be sanctioned.
[youtube]BpN9Ao4Sa68[/youtube]