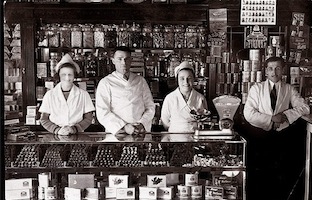 An  exhibition entitled Selling An American Dream: Australia’s Greek Cafe, will be launched on March 27 as part of the Greek Festival of Sydney.

The gallery’s curator and historian Leonard Janiszewski and photographer Effy Alexakis worked on documenting the historical and contemporary experiences of Greek Australians since the early 1980’s. Their efforts have produced two books, an SBS documentary and partnership with the Australian History Museum at Macquarie University.

The exhibit was initially launched to critical acclaim at the National Museum of Australia in 2008. It has been touring nationally and its display on campus at the Art Gallery has been eagerly awaited, particularly given the display’s long and close association with Macquarie.

Australia’s Greek-run cafés populated towns and cities across the nation. These enterprises run by Greek migrants/settlers successfully married Hellenic and cross-cultural influences with local needs merging local fare with new American food-catering ideas. As such, they contributed to a major change in Australian eating habits prior to the explosion of fast-food franchises as they introduced American sodas, ice-cream sundaes, milk shakes, milk chocolate and hard sugar candies to Australians.

They also generated powerful and dramatic social and cultural change acting as a “Trojan Horse” for American popular culture, not only affecting eating habits, but also cinema, music and architecture. The exhibit features a mix of historical and contemporary photographs married to extended oral history captions and a dramatic multimedia presentation created by film-maker Michael Karris.

Alexakis’ stunning photographs captures the décor of the cafes, their customers and owners. Memorabilia from several famous Greek cafes including classic Art Deco tableware, café signs and more are on display. For anyone who remembers enjoying a milk-shake, ice-cream sundae, milk chocolate treat or hamburger at their favorite café, Selling an American Dream: Australia’s Greek Café is an exhibition not to be missed.