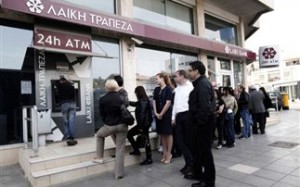 According to the Australian press, the international economy is in anxiety because of the unpredictable turn of the Cypriot financial crisis after the Parliament’s rejection of the deposits’ haircut proposal.

The newspaper Australian Financial Review explores the causes of the crisis in Cyprus as “a product of the lack of political reliability in the European Union, and the gap between the European North and the European South.”

The newspaper comments that “from the moment the financial crisis in the Eurozone appeared, the German mass media is full of derogatory and unfair reportage and articles concerning corruption, sloth and tax evasion in the European South.”

Cyprus is projected as a “tax haven, a place to launder Russian black money”, and it reminds of the unwillingness with which the country was accepted in the EU in 2004, “because of the partition and under Greece’s strong pressure by threatening that it would exercise its veto power against other prospective member states’ integration in the EU.”

The article says that “the lack of convergence, trust and political culture are equally important factors, as is the lack of financial convergence in the EU, a fact proved by the Cypriot financial crisis.”

The Sydney Morning Herald pointed out that “the markets’ fall in world Stock Exchanges is a consequence of this situation, as the European officials of the European Central Bank support that Cyprus should contribute to its financial rescue by finding the amount of €5,8 billion in any way.”

The reporter stresses that the cause of “the current crisis that threatens the Euro zone with collapse, is based on the deficit up to 127% of the GDP, which is a product of the Cypriot banks’ exposure to the Greek financial crisis, on the over sized banking sector, owing to the fact that the largest amount of deposits originate from abroad, and the great expectations of immediate benefits from the hydrocarbon and natural gas deposits’ exploitation.”

The article concludes that the latest developments lead “to closer cooperation with Russia and departure from EU’s priorities.”