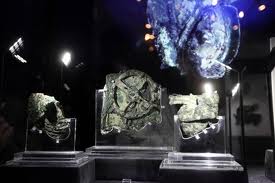 The unique exhibition, The Antikythera Shipwreck: the Ship, the Treasures, the Mechanism, which is currently on show at the Archaeological Museum in Athens, will close on April 28 after a year-long run.
The exhibition, which opened on April 5 last year, is the first time that all the findings from the Antikythera wreck, dated between 60-50 BC, have been displayed together, while some of the items had never been displayed before.
The Antikythera Shipwreck has turned out to be an object of interdisciplinary research. Its finds date from the fourth to the first century B.C. Its cargo attests to the existence of trade in art, then new in the western world. The 378 exhibits are presented in carefully selected sections.
The bronze and marble statues, glassware, bronze vessels and the golden jewelry represent only a part of the cargo, whose remainder still lies at the bottom of the sea, possibly located at deeper levels.
One-third of the exhibition has been dedicated to the mechanism, an exquisite, unique device of mathematical and astronomical genius, which has created worldwide interest. The Antikythera Mechanism itself was discovered on May 17, 1901, when archaeologist Valerios Stais noticed that a piece of rock recovered from the site had a gear wheel embedded in it. It was discovered in the Antikythera wreck off the Greek island of Antikythera, between Kythera and Crete, and has been dated to about 150-100 BC. Technological artifacts of similar complexity appeared a thousand years later.