Documetary on the Nafplio Guillotine 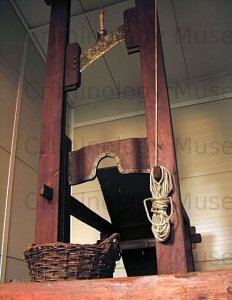 A television tribute of AMNA TV releases the history of the guillotine, which operated in Nafplio for the execution of the death penalty, from the period of King Otto until 1930. The camera of AMNA recorded for the first time the guillotine with which bandits, criminals and people condemned to death were beheaded. This guillotine is kept today in the Museum of Criminology of Athens.
It’s a documentary-travelogue of George Kouvaras at Nafplio, which reveals who were the executioners, how hated they were by the Greek people, what the correspondents of that period broadcasted in every public execution, through rare documents, unknown for a long time, that illuminate the history of guillotine with picture and sound.
It’s characteristic that even Victor Hugo stigmatized the presence of guillotine in Greece by writing: “The first days of October 1846 the sun of Greece illuminated two things, the one opposite to the other: the Parthenon and the guillotine”.
Victor Hugo, who refers to the decapitation of three men at Piraeus, observes that “after 16 years of hesitation and repugnance by the people, the guillotine has installed in Greece.”
Professors, researchers and the mayor of Nafplio speak in the travelogue. The mayor of Nafplio, Dimitris Kostouros, has made known the request to return the guillotine back to Nafplion, and to be installed at Bourtzi or Palamidi, in order to add value to a thematic tourism and to highlight the historical traditions of Nafplio.
[youtube]aMQYe6jilj0[/youtube]