Gerard Butler: ‘This is Sparta!’ Reenactment 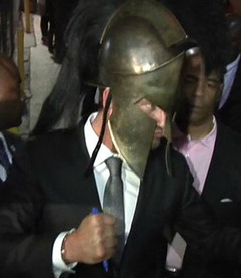 Fans who turned out to get a glimpse of Gerard Butler before his appearance on “Jimmy Kimmel Live” in Los Angeles were treated to a reenactment from the film “300.”

Butler’s infamous portrayal of King Leonidas made him a celebrity around the world. The epic film, about the battle between the Greeks and Persians in 480 B.C., had Butler proclaiming, “This is Sparta!” As he signed photos and chatted with fans last night, someone passed him a Spartan helmet similar to the one used in the film. Butler put it on, then reenacted the line from “300,” and the crowd went wild.

Check out the video as the actor channels Leonidas:

Butler bowed out of appearing in the sequel, “300: Rise of an Empire,” which hits theaters in August.