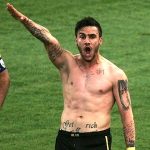 After being barred for playing from the national team for life for giving a Nazi salute to celebrate scoring the winning goal for his team, AEK Athens, in a Greek league game, 20-year-old rising Greek soccer start Giorgos Katidis has apologized. He also asked to be excluded as a starter for his team before AEK officials decide whether to drop him.
Katidis joined the club from Aris Salonika last year after impressing in Greece’s run to the final of the European Under-19 Championship where they lost to Spain.
“I would like to confess that I am totally unacceptable and I feel terrible for those I upset with the stupidity of my act,” Katidis said in a statement. “I made the mistake so I will be the one to pay for it, AEK is not responsible. So that is why I have decided to put myself out of the team because I have now realized how much I have offended the history of the club.
“Also, I understand fully the reasons for the decision made by the Greek Football Federation to which I owe a huge apology as it has helped me to get where I am in the professional game.” He added that, “Unfortunately I cannot take the clock back but I want to clarify that I am not a fascist or neo-Nazi or racist. I have a step brother from Puerto Rico and all my family are from the Black Sea and have experienced racism in the worst ways,” he said.
“There is no reason to look for excuses. I was completely wrong and I will pay for it with a lot of pain because despite being only 20 years old my career is now at risk. I sincerely apologize to my team mates and everyone involved with the club that I have insulted in not knowing exactly what I had done in my celebration. Nonetheless, the fact that I did not know what I was doing is no excuse,” Katidis added.
AEK officials want him to explain himself and will decide his future at a board meeting next week. He was heavily criticized by political parties and fans on Twitter and Facebook following the incident at the Athens Olympic Stadium. Sunday marks the 70th anniversary of Greek Jew deportations in Nazi concentration camps in the Second World War.
“The player’s action to salute to spectators in a Nazi manner is a severe provocation, insults all the victims of Nazi bestiality and injures the deeply pacifist and human character of the game,” the Greek federation (EPO) said in statement. Super League president Giannis Moralis said his organization would consider possible sanctions against the player, Reuters reported.
Katidis initially denied he gave a Nazi salute, saying he was pointing at a person in the stands, Michalis Pavlis, to dedicate the goal to his team mate as he continues to fight health problems. AEK’s German coach Ewald Lienen backed Katidis. “He is a young kid who does not have any political ideas. He most likely saw such a salute on the Internet or somewhere else and did it without knowing what it means,” he said.